The engine of the watch.

The mechanism that allows for the winding of the movement and adjustment of functions like date and time. To enhance water resistance, crowns can screw into the case to form a seal against moisture or water.

Case attachment that controls functions, such as the chronograph or date adjustment.

Case attachment that allows for a strap or bracelet to be attached to the watch case.

Oscillating weight that winds an automatic watch when worn.

Commonly a leather or rubber attachment that secures a watch to the wrist. Metal attachments, generally made from stainless steel or gold, are referred to as bracelets.

A small dial set within the main dial, which is used to display an additional complication such as chronograph readout, seconds, or date.

Fitted with a mineral or sapphire crystal to show movement finishing.

Hour indicator applied or painted on the dial.

Holds the movement and protects it from the elements. It can be made from different metals and comes in different shapes.

The most common case shapes include: 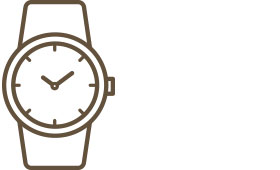 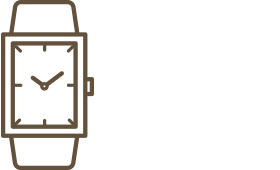 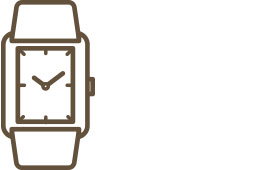 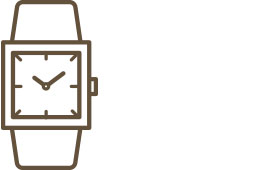 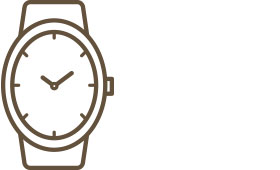 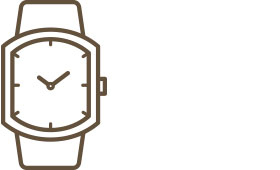 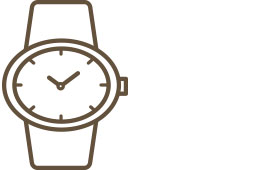 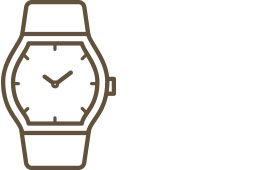 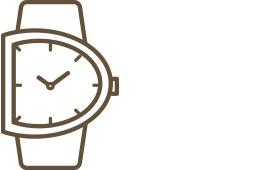 Cases can be made from a variety of materials that include:

This is the “glass” that covers the face of the watch and protects it from dirt and water. There are three major types of crystals produced and used in watchmaking: 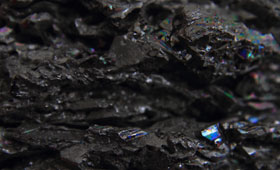 This transparent, lab-grown element has exactly the same chemical composition of natural sapphire but at a fraction of the price. It is used because sapphire is the second hardest known element, right after diamonds. This makes it extremely scratch resistant and useful for watch crystals. The downside to this is that it can chip or shatter if impacted. If this happens, microscopic particles of sapphire can get into the movement and act as an abrasive, causing damage. Sapphire is also the most expensive type of crystal, costing several hundred dollars to replace. The majority of watches imported from Switzerland have sapphire crystals. 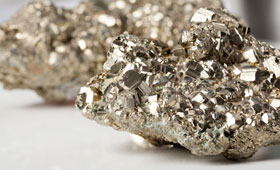 Mineral crystals are simply made of glass. They have been used in watchmaking for hundreds of years. Mineral crystals are relatively easy to scratch, and these scratches cannot be buffed out. They are inexpensive compared to sapphire crystals, usually costing less than one hundred dollars to replace if damaged. 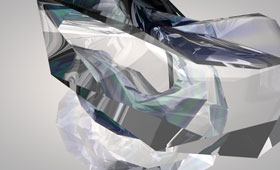 Similar to plastic, acrylic is the most affordable type of crystal but also the most prone to scratching and can crack if impacted. Minor scratches can be buffed out and acrylic crystals can be molded into elaborate shapes that sapphire and mineral crystals cannot.

On the face of the watch, there are many different ways that a dial can be marked. The below shows some of the most popular types: 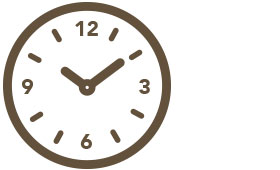 An Arabic & Stick dial has both numerals and stick indicator markers. 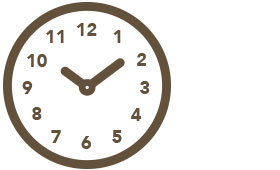 An Arabic dial only has numeral indicator markers. 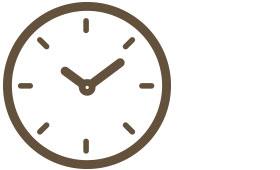 A Stick dial has no numeral indicator, only marks or dots. 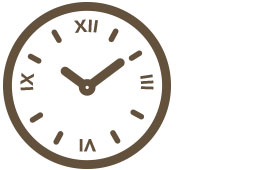 A Roman & Stick dial has both Roman numerals and stick mark indicators. 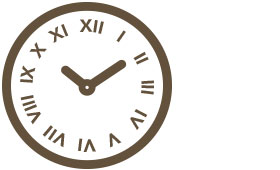 A Roman dial only has Roman numeral mark indicators. 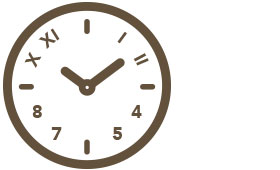 A California dial consists of half Roman and half Arabic numerals.

Many watches have glow-in-the dark hands and hour markers. The substance used for this purpose has evolved over the years. Originally, Radium was used in the 1950’s but was found to be highly radioactive and was replaced with a substance called Tritium. Tritium had much lower levels of radiotoxicity and was considered a much safer alternative to Radium. You can tell if a watch has Radium or Tritium markers because it will have the letter ‘T’ or ‘R’ printed on the dial, usually flanking the country of origin(ex. T-Swiss Made-T, or R-Swiss Made-R). 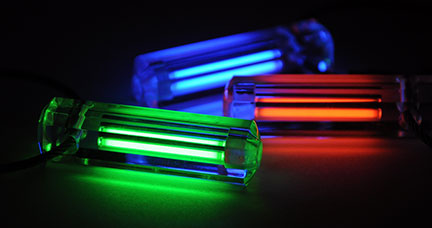 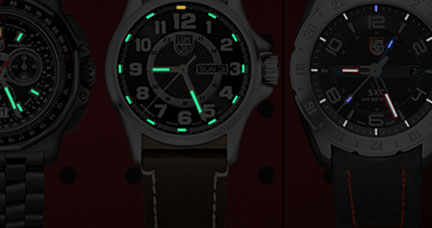 Recently a new substance, Super- LumiNova®, has been introduced, which has no radioactive properties and is three times as bright as Tritium. It also does not discolor as Tritium does when it ages. 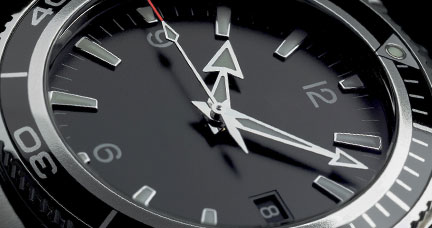 There are many different designs used for the hands of the watch. Hands that are a dark navy in color are called “blued steel” hands and are the result of super heating steel until the color changes.

This technique was first used by the famous watchmaker Abraham-Louis Breguet in the 19th century to help make the hands more legible. 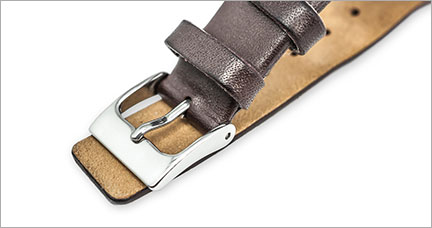 Traditional type buckle in which one end of the strap is slipped through a buckle with a pin used to secure the fit. 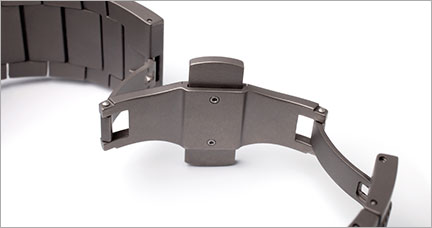 Leather strap attached to folding metal buckle that is considered safer to wear than a regular Ardillon buckle due to the fact that if the buckle should open up, the watch is still attached to the wrist. This was invented by Louis-Cartier in the early 20th century.

A bezel is the ring around the case that can secure the crystal. Bezels can be functional for diving and timing, or purely aesthetic as with a diamond set bezel. 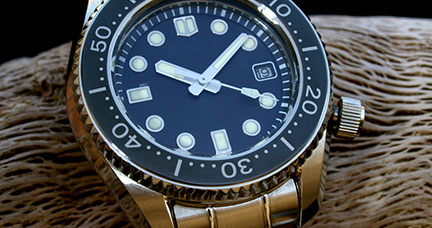 A diving bezel enables a diver to visually keep track of his/ her air supply by measuring dive time using minute markers from 0 to 60 on a unidirectional rotating bezel. Unidirectional bezels only rotate in the counter-clockwise direction for safety reasons. Before diving, the diver sets the bezel according to his/her air tank supply. 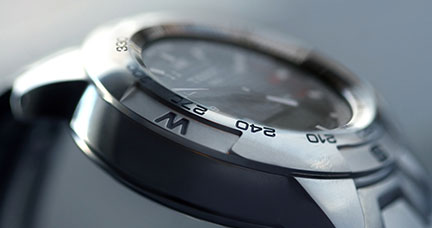 Similar to a diving bezel but can move both clock and counter-clockwise. This type of bezel might be used in timing parking meters, cooking, etc. 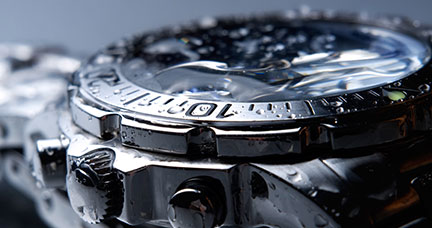 While not technically part of a watch’s anatomy, it is important to have a good understanding of what the phrase water resistance means and how it applies to a wristwatch. The term “waterproof” is not allowed by the Federal Trade Commission in the United States. This is because under the proper conditions, anything can leak. The phrase “waterproof” is used in almost all of the rest of the world.

The Bar is a unit of pressure measurement that is essentially equivalent to an ATM. If a watch displays that it is pressure resistant to 3 Bar, it would be water resistant to 99 feet. 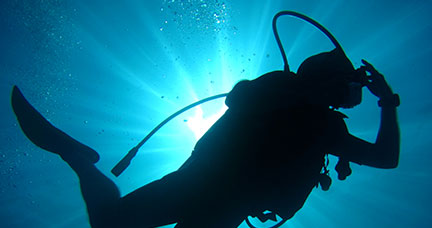 Many professional dive watches are equipped with a helium escape valve, a watch feature geared towards professional deep sea divers. It allows the extreme pressure from the depths of the sea to escape the watch via a valve that automatically opens when the pressure is greater inside the watch than outside. 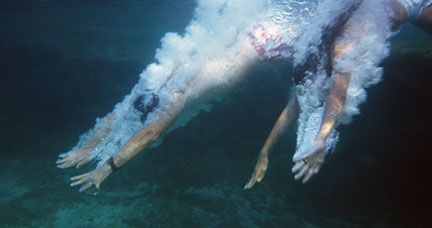 In many ways, shock resistance is even more important to a watch than water resistance. A wristwatch is subject to a lot of movement, sometimes sudden, and with a great deal of force. If a watch is not properly shock resistant, it is incredibly easy to impact the movement and damage it. There are several methods watchmakers use today to make movements shock resistant. One of the most common is the Incabloc system introduced by Universal Escapements, Ltd. of Switzerland in 1933. The Incabloc system allows the most sensitive parts of the movement to move sideways when impacted by a shock and then return to its normal position under pressure of small springs above the movable carriage. Most other shock resistant assemblies work off a similar principle to the Incabloc, using springs as shock absorbers.